Interactive Virtual Events on Nov. 30 and Dec. 1 Will Feature the Society’s Highest Honors, Showcase an Array of Industry Luminaries

WHITE PLAINS, N.Y. — Nov. 22, 2021 — SMPTE®, the home of media professionals, technologists, and engineers, will honor industry luminaries and next-generation leaders at the SMPTE Awards Gala, a virtual event taking place across two ceremonies on Nov. 30 and Dec. 1. Registration is free for this year’s event, which will feature a unique social reception and a program schedule that makes it easy to engage and celebrate with friends and colleagues around the globe.

Held on an interactive platform designed for award ceremonies, this year’s Awards Gala will allow guests to text and video chat with one another while watching the ceremony. “Doors” open an hour prior to the start of each Gala program, giving guests time to join a virtual cocktail hour, find their table, and chat with other guests.

“This year’s Gala leverages a virtual format to make the awards celebration more accessible than ever,” said SMPTE Executive Director Barbara Lange. “We have four wonderful hosts lined up to recognize the impressive group of 2021 honorees, and we’re proud to be presenting the event on a truly interactive virtual platform that will give guests a real opportunity to meet, connect, and share the experience in a meaningful way.”

Two of the Society’s most esteemed honors will be awarded during the 2021 Gala. They include the Progress Medal and Honorary Membership. The Progress Medal is the Society’s most prestigious medal award. It was established in 1935 and recognizes outstanding technical contributions to the progress of engineering phases of the motion picture, television, or motion-imaging industries. Honorary Membership is the supreme accolade of the Society and recognizes individuals who have performed eminent service in the advancement of engineering in motion pictures, television, or in the allied arts and sciences. Individuals who were not awarded Honorary Membership during their lifetime may be honored posthumously by being added to the Honor Roll.

Girish Balakrishnan (Director, Virtual Production, Netflix) will be awarded the Progress Medal in recognition of his long-term commitment and unwavering pursuit of the democratization of virtual production methodologies, which has resulted in significant global advancement in the field and influenced how feature films and television shows are produced today. Balakrishnan is a technological pioneer who is ushering in a new era of film production.

Christopher J. Cookson (Retired, Warner Bros.) will have Honorary Membership conferred upon him in recognition of his pioneering efforts to advance technology in the production and distribution of television and motion pictures. He espoused advancements in high-definition and ultrahigh-definition video and played key roles in the successful industry development and standardization of digital video discs (DVDs), digital cinema, and digital mezzanine files for automated distribution delivery. Cookson holds numerous patents in the fields of optical discs and film restoration.

Wendy Aylsworth (CEO, Walden Pond – formerly of Warner Bros.) will be awarded the Progress Medal in recognition of her long career, during which she helped shape how media content is distributed to homes and movie theaters around the world. Throughout the years of the great media transition from analog to digital, Aylsworth has been an inspiration and beacon for media technology and strategy, inspiring her coworkers both nationally and internationally, and always willing to help and encourage others.

Peter Jackson (film director, screenwriter, and film producer) will be awarded Honorary Membership in recognition of outstanding technical contributions to the advancement of engineering in motion pictures and the allied arts and sciences. Jackson led his technology company, WETA Digital, in the development of groundbreaking digital effects for the “Lord of the Rings” trilogy, including a software system to generate intelligent crowds for battle scenes and advanced motion-capture techniques. “The Hobbit” trilogy included the first motion pictures to be captured and exhibited in 3D at 48 frames per second, resulting in significant advances in equipment and production. Jackson’s continuous pursuit of improved storytelling through new technologies has earned him global acclaim.

David Sarnoff (1891 – 1971) will be named posthumously to the Society Honor Roll in recognition of his visionary leadership in the advancement and implementation of color television and other communication technologies. His realization that radio signals could be “broadcast” to many rather than just a few revolutionized mass communication, beginning with radio and progressing to television. Sarnoff established a highly productive and successful research and development lab to fuel new communications technologies. His innovation support at the RCA Laboratories in Princeton, New Jersey, led to the establishment of the U.S. color TV standard in 1953, which became the basis for monochrome-compatible color TV systems worldwide.

Further information about all of the 2021 honorees is posted on the SMPTE Awards page at https://www.smpte.org/engage/awards-gala, as are details about how to reserve a congratulatory ad in the event pre-show, become a Gala sponsor, or secure a sponsored table. Those interested in sponsoring or reserving a congratulatory ad can contact Jeff Victor for North America (jvictor@smpte.org, +1 847-721-2730) or Neil Howman for EMEA (+44 7941 717 436, nhowman@smpte.org).

Registration is open now at https://smpte-awards-gala.evessiocloud.com/smpteawardsgala/en/page/home. Further information about SMPTE is available at smpte.org.

SMPTE is the global society of media professionals, technologists, and engineers working in the digital entertainment industry. The Society fosters a diverse and engaged membership from both the technology and creative communities, delivering vast educational offerings, technical conferences, and exhibitions, the SMPTE Motion Imaging Journal, and access to a rich network of colleagues essential to their career success. As an internationally recognized standards organization, SMPTE also provides a vital technical framework of engineering standards and guidelines that allow the seamless creation, management, and delivery of media for art, entertainment, and education worldwide.

Description: Link to download head shots of all the 2021 honorees. 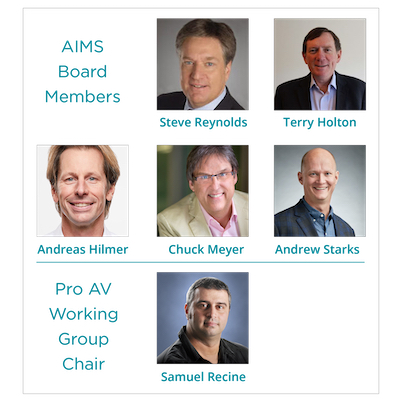 BOTHELL, Wash. — Dec. 1, 2021 — The Alliance for IP Media Solutions (AIMS) today announced that all members of the AIMS Board of Directors

NEW YORK — Nov. 18, 2021 — Flowics, creator of the most comprehensive platform for powering remote and in-studio production of live graphics and interactive