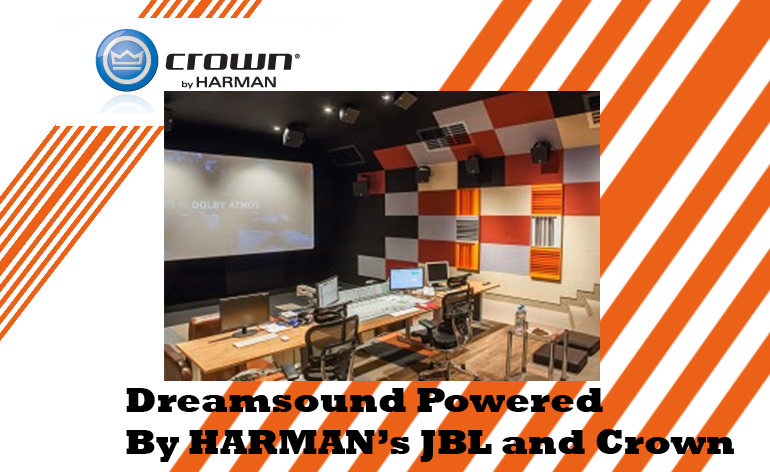 WARSAW, Poland — Since 2007 Warsaw-based Dreamsound (www.dreamsound.pl) has been one of Poland’s top film post-production studios, offering a complete range of services from recording sound on set through sound editing, mixing and audio mastering. Since its inception Dreamsound has been committed to offering its clients the very latest in film sound technologies, as evidenced by the fact that it’s the first post-production house in Poland licensed to produce film soundtracks using the leading-edge Dolby Atmos surround-sound system, heard at its full potential thanks to a system based around HARMAN’s JBL ScreenArray™ loudspeakers and Crown DSi and XLS DriveCore Series amplifiers.

Dolby Atmos is a next-generation surround-sound technology that employs overhead speakers as well as traditional surround speakers to create a remarkably realistic and immersive sonic environment. Dolby Atmos employs up to 64 speakers to heighten the enveloping sonic atmosphere and impact of movie theater sound. The Dolby Atmos JBL and Crown system is installed in a new 280 square foot, 15-seat screening room that opened in January 2014. Dreamsound co-owner Kacper Habisiak worked closely with JBL and Crown brand manager Wojtek Kopytek at HARMAN Professional distributor ESS Audio and with Dolby personnel in designing and installing the screening room.

The installation employs a total of 32 JBL loudspeakers including ScreenArray 3731-T 3-way tri-amplified loudspeakers and 4642 dual-18-inch subwoofers arranged behind the 20-foot wide projection screen in a left-center-right configuration. JBL SCS 12 and SCS 8 Spatially Cued Surround 12-inch and 8-inch coaxial loudspeakers are mounted on the ceiling, side and rear walls, augmented by two JBL 4181 18-inch subwoofers. The loudspeakers are driven by a complement of Crown DSi 1000 and XLS 2500, XLS 2000, XLS 1500 and XLS 1000 amplifiers.

“JBL speakers are the standard in Polish cinemas, and they match perfectly with Crown amplifiers, so it was a logical move for us to implement these components in our Dolby Atmos screening room,” said Habisiak. “Equally important, the performance of the speakers and amplifiers meets Dolby’s licensing requirements, which are extremely stringent regarding specifications including sound pressure levels, frequency response, coverage relative to room size and other parameters.”

“The JBL and Crown system far exceeds our expectations,” Habisiak noted. “It’s one thing to meet the Dolby Atmos specs, which are admittedly quite demanding – but it’s another thing to actually experience what this system can do. The combination of the clarity, dynamic power and seamless integration of the speakers and amplifiers with the three-dimensional width, depth and height localization of the Dolby Atmos process is truly remarkable to hear.”

HARMAN designs, manufactures and markets premier audio, visual, infotainment and integrated control solutions for the automotive, consumer and professional markets. With 15 leading brands, including AKG®, Harman Kardon®, Infinity®, JBL®, Lexicon® and Mark Levinson ®, the Company is admired by audiophiles, musicians and the entertainment venues where they perform. More than 25 million automobiles on the road today are equipped with HARMAN audio and infotainment systems. HARMAN has a global workforce of 15,200 people and reported sales of $5.1 billion for the last 12 months ended March 31, 2014.